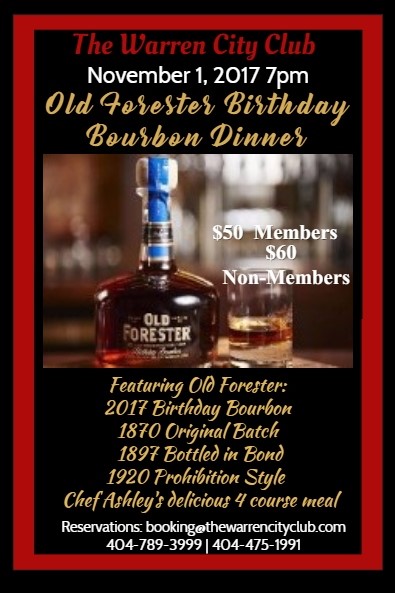 Southern Classics is the inspiration behind our  2017 Old Forester’s Birthday Bourbon Dinner Menu. Chef Ashley Felder has created a southern comfort menu, which, when paired with the differing styles of Old Forester’s Bourbon, will warm your soul. By the end of this fabulous evening, you will be blessing everyone’s heart and planning a trip to the Kentucky Derby.

The Menu offers bold and delicious courses, designed to work well with the characteristics of the different bourbons:

Next we’ll move to a taste of Old Forester 1870 Original Batch, made in the original style available to founder/distiller George Garvin Brown, in 1870, the founding year of Old Forester.  This taste will be served straight with Crab Cake Hush Puppies.

From there, we will enjoy a taste of Old Forester 1897 Bottled in Bond  with delicious Carolina Bar BQ Sliders.

Dessert will be an old fashioned Peach Cobbler served with Old Forester 1920 Prohibition Style Bourbon.  Dinner will finish with a taste of the limited release and highly coveted 2017 Old Forester Birthday Bourbon.

We hope ya’ll will come and enjoy this Old Forester’s Birthday Bourbon Dinner with us – you know it’s impolite to turn down an invitation in the south.

Here’s a little more History about Old Forester’s Bourbons to wet you whistle:

Founded in 1870, Old Forester (Originally named Old Forrester after a friend of founder/distiller George Garvin Brown) is the only bourbon continually distilled and sold by the founders, before, during and after Prohibition.  In 1920, when most distilleries had to close, Old Forester (renamed Brown- Forman) applied for and received a federal license to continue production of Old Forester for medicinal purposes.  In 2002, Old Forester began honoring the birthday of their founder with a limited release of “Birthday Bourbon” which is a 12 year old small batch comprised of specific barrels selected by the Master Distiller.  In 2003, the first year after the inception of the tradition, Old Forester Birthday Bourbon won American Whisky of the Year at WhiskyFest New York.   Today, only 100 barrels of this bourbon are released annually and they are allocated to specific vendors who qualify to sell them.